Green Sustainable Design Principles: Integrating the Green and the Blue 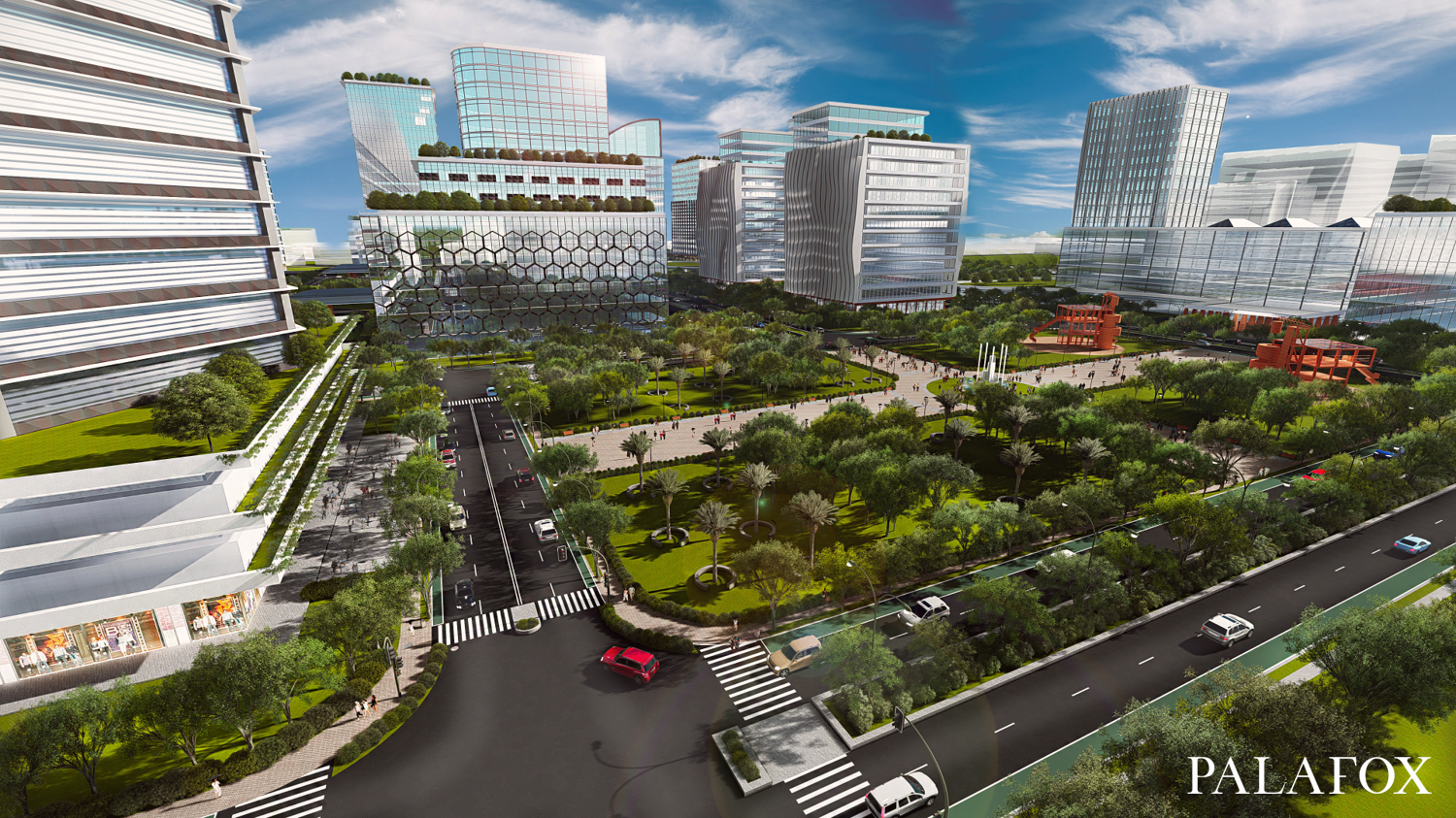 Published by BizNewsAsia on October 31, 2022

Green infrastructure is one of the anchors in pursuing resilience and holistic sustainability.

Sustainability, in general, is defined by the United Nations Brundtland Commission in 1987 as “meeting the needs of the present without compromising the ability of future generations to meet their own needs.”

‍Resilience, on the other hand, is defined by the Intergovernmental Panel on Climate Change as “the ability of a system and its component parts to anticipate, absorb, from the effects of a hazardous event in a timely and efficient manner, including through ensuring the preservation, restoration, or improvement of its essential basic structures and functions.”

By definition, green infrastructure emphasizes on utilizing nature-based, interrelated and, at times, interconnected design solutions. An integration between the green and the blue influence ecosystem services that make human life possible.

All natural, semi-natural, and engineered green infrastructure solutions, most especially, offer to address the impacts of climate change and strengthen climate resilience. Our urban and coastal wetlands; forests; landscapes; coral reefs; other natural ecosystems; and urban green spaces like rain gardens, rooftop gardens, and stormwater parks are just a few examples of green infrastructure. Many cities around the world have been turning to these natural solutions to alleviate and mitigate problems like flooding, dwindling water supplies, rising sea levels, and storm surges, among others.

These are problems that our Philippine islands also face. There are 10 man-made and eight natural disasters in the world, and we experience most of these. For the past five years, our country is consistently in the Top 10 countries of the World Risk Report by Bündnis Entwicklung Hilft and Ruhr University Bochum, even topping the list this year with a 46.82% disaster risk score.

According to PAGASA climate scientist Dr. Marcelino Villafuerte (2022), the country has sunk by around 12 centimeters in the past two decades, which is three times faster than the global average. The Philippines also sits at a typhoon belt in the western part of the Pacific Ocean. This is where around 30% of the world’s tropical cyclones form, and we experience around 20 and approximately eight make landfall, annually. We are located at the Pacific Ring of Fire in the world where 90% of the world’s earthquakes occur. Among our numerous volcanoes, we have 24 that are active, including recently restive Bulusan, Mayon, and Taal volcanoes.

Our geography ultimately predisposes us to disasters. What more when the effects of climate become even more apparent?

Different forms of green infrastructure have been increasingly utilized by progressive cities as an urban planning solution for the urban water cycle that includes stormwater, groundwater, wastewater management, and water supply. With green infrastructure, instead of looking at water run-off from rainstorms, snow, or other sources as a liability or problem, it is stored and used as an alternative resource when water supplies are low. Other examples of green infrastructure include simple rainwater tanks and rain gardens in our homes, rainwater harvesting mechanisms and green walls in our buildings, bioswales in our streets, and wetlands and well-preserved water bodies within our cities.

The more expansive our green infrastructure is in our cities, the stronger our capabilities are to capture and filter stormwater that replenishes groundwater. On the other hand, gray infrastructure cannot absorb run-off resulting in intense flooding and more frequent maintenance works to the infrastructure. Porous and permeable natural landscapes like green streets, urban forests, inland wetlands, floodplains, and parks improve stormwater quality because they can easily absorb and filter out unwanted minerals, sediment, and other contaminants. Roads and streets that are integrated with green infrastructure reduce the pressure on drainage systems and help lengthen the lifespan of gray infrastructure.

Expanding tree cover and landscaping as part of green infrastructure can reduce urban temperatures by as much as 2 to 8 degrees Celsius, decrease air pollution, improve urban biodiversity, enhance the city's sense of place and aesthetic qualities, and add market value to places. In terms of cost, several studies have shown that investing in green infrastructure is much less expensive than investments in gray infrastructure. For example, New York City analyzed two plans to manage its stormwater flows. They found out that they can save $1.5 billion if they choose green infrastructure that will include green roofs, stream buffer restoration, landscaping, and bioswales instead of storm drains and tunnels under a gray infrastructure plan.

The National Oceanic and Atmospheric Administration promotes green infrastructure for coastal resilience — something that we need to strengthen as an archipelagic country with more than 36,000 kilometers of coastline. Shoreline green infrastructure concepts include mangrove forests, coral reefs, and seagrass beds that serve as eco-buffers between land and sea, prevent flooding and coastal erosion, and reduce wave intensity — further protecting coastal communities. Other approaches include restoring marshes, wetlands, and living shorelines that are coastal edges made of natural materials like sand, plants, and rocks.

In Seychelles, the majority of the population and economic activities are found in the coastal areas. However, these areas are constantly affected by severe tropical storms and coral bleaching that have further resulted in beach erosion. To prevent erosion, communities previously applied ad hoc solutions like placing rock armoring on the beaches. However, this impacted the attractiveness of the beach, and tourism revenues declined. With a newly developed Coastal Management Plan supported by the World Bank, Seychelles now has comprehensive and integrated priorities that include nature-based solutions like dune and coral reef reforestation alongside risk-based spatial planning.

In China, they have the "Sponge City Initiative" through which they use green infrastructure such as low-elevation greenbelts and grass swales that help address urban flooding. One example is the Yanweizhou Park in Jinhua City. Instead of building high concrete flood walls, they developed a flood park that could sequester stormwater during seasonal monsoon flooding. The park is closed to the public during flooding periods, but during the dry season, the public can enjoy the park's features including a terraced river embankment, lush natural vegetation, and a durable bridge and path system and pavilion that adapt to water currents, among others.

One of Sydney's jewels is its green spaces. Its Green Grid project is a good example of a comprehensive plan that interconnects a city's networks of green infrastructure and landscaping to the city centers, public transport routes, waterway corridors, and pedestrian and cycling paths. Aside from fostering urban renewal, providing attractive spaces for recreation, and improving the overall environment of the city, Sydney's green infrastructure is essential in managing water quality, treating stormwater, and mitigating flood risks.

New Orleans, a coastal city near the Mississippi River and the Gulf of Mexico, was heavily devastated by Hurricane "Katrina" in 2005. Ten years later, the city was able to formulate the "Resilient New Orleans" strategy. Through this, they were able to alter the infrastructure of the city with more natural systems, which allow them to safely and resiliently live with the water that surrounds them. The city has been adding more trees, green roofs, pervious pavement, dry ponds with vegetation, infiltration trenches, and bioswales and has been transforming vacant lots to rain gardens that reduce run-off from the streets.

With all the available research and best practices on green infrastructure, let us hope that our national and local governments and the private sector will study and apply more nature-based solutions that have proven to be sustainable, resilient, and more environment-friendly.